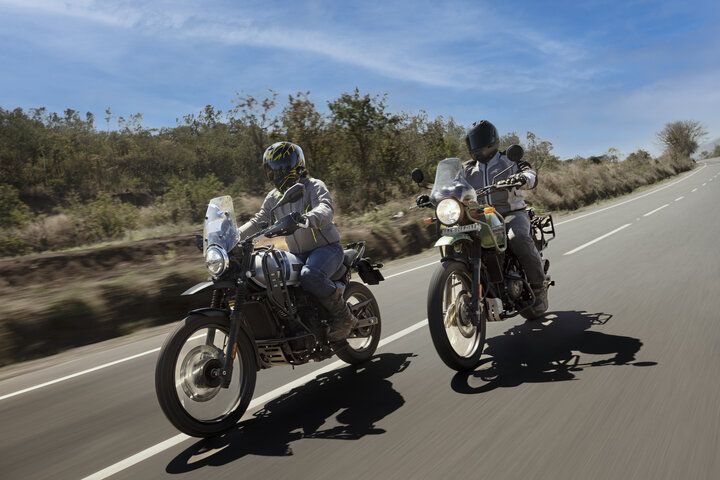 Think of Indian adventure motorcycles, and the Royal Enfield Himalayan is probably the first motorcycle that comes to mind. After various minor but necessary updates over the past six years, the Himalayan formula is now reliable and proven. So much so that it appears resurgent brand Yezdi has ‘referenced’ its first adventure offering, subtly called the Adventure, to the Himalayas.

The design similarities between the two are quite obvious. What is different, however, is the heart of the Yezdi, a sophisticated liquid-cooled engine with more claimed performance on tap. So we can’t wait to find out what other secret ingredients Yezdi added to the adventure to make it a better Himalayan?

As mentioned, the Yezdi Adventure engine is modern and technologically advanced, with a 6-speed gearbox associated with it. It weighs less too, 11 kilos in all. So a lighter bike is faster, right?

Yes, the Yezdi manages to outrun the Himalayas in the 0-100 km/h sprint by more than a second. It also reaches speeds over 130 km/h much faster and easier than the Enfield. The Yezdi also feels livelier in lower gears, thanks to the extra gear ratio.

However, these numbers are purely for academic reasons. In the real world, the Yezdi doesn’t actually help you reach your destination any sooner than the Himalayas. Added performance cannot be used for extended durations due to low refinement levels. When you open the gas and rev the engine to your liking, you get harsh, persistent vibrations at the ankles, seat and, most importantly, the tank.

This harshness forces you to settle down to a lower speed of around 100 km/h, where the Himalayas feel more relaxed. First of all, it runs more quietly, with the engine revving about a thousand rpm slower than the Yezdi. Although it sounds a little garish, it also feels softer.

Plus, the Himalaya makes every trip effortless, thanks to its high-torque 411cc engine. When you slow down for a slow vehicle on the highway, all it takes is a twist of the throttle to pick up speed. The Yezdi makes you work a bit, as it isn’t as eager to regain lost momentum, forcing you to downshift a cog or two. In fact, we even tested 60-60 mph acceleration in the top gear of both bikes, and the Himalayan took 11.16 seconds to complete the race, a second quicker than the Yezdi.

The ease of the Himalayas is also found in the city, as you can just leave it at a higher gear and ride at commuting speeds, which seems impossible to do on the Yezdi. The benefit of brilliant handling will be much appreciated by commuters as the Himalayan’s clutch is heavier. That said, shifting was a little smoother on the RE.

Now both motorcycles can carry almost the same amount of fuel on board. But it’s the Himalayan’s torquey motor and high gearing that make it a very efficient motor for highway use.

Take everything Indian Roads has to offer

Before we get into the design similarities, we should mention that both bikes have the same wheelbase, ground clearance, suspension travel and wheel sizes. But after riding both, it feels like only one of them is capable of taking on anything an Indian road can throw at a rider, and unfortunately that isn’t the Yezdi.

This is because of two issues, both of which relate to suspension tuning. First, the rider never feels installed on the bike. Even on smooth sections of tarmac, at 50-55 km/h you get that constant rocking feeling. As a result, when negotiating steep bumps on the highway or big speed bumps in town, the extra monoshock tends to knock the rider out of the seat, upsetting the bike’s rhythm.

What’s more pressing is that the front end doesn’t quite soak up the bumps to your liking. It stands in stark contrast to the Himalayan, whose suspension has been calibrated to absorb uneven surfaces brilliantly. This lets the rider pass much less, which means you sit calmer, unlike the taut Yezdi setup.

Not to be confused, the Yezdi doesn’t feel jarring or harsh like the “sporty” KTM 250/390 Adventures, but it isn’t as masterful at tackling broken sections of tarmac.

This tight configuration has its advantages in the corners; adventure provides a calmer and safer experience. It feels lighter to steer and more balanced when leaning over, and the extra-wide rear tire has to be credited for the latter.

And the one area where the Royal Enfield Himalayan continues to disappoint is its braking service. The bike has been on sale for over six years, but RE still hasn’t really improved its stopping performance.

Braking on the Yezdi feels like that of a modern adventure bike, with a fair amount of bite and lever progression. It does not require much effort from the levers to immobilize the bike. In addition, the ABS calibration is perfectly executed.

When things get tough

When you’re in the adventure touring market, you’re bound to be interested in the bike’s off-tarmac riding capabilities. And this is where the Royal Enfield Himalayan feels right at home. It puts the rider at ease, with its supple, foldable suspension setup and easy, accessible ergonomics. Our test bike ran with the wider handlebars in the RE GMA catalog, and we think it’s a must-have for all Himalayan buyers because it not only reduces fatigue on long rides, but also improves your control over the terrain. difficult.

The Yezdi demands more from the rider as one cannot properly lock onto the bike due to its design. More importantly, the Adventure’s taller footpegs would force you to take a fraction longer to get your feet on the ground, and for shorter riders who just want to buffer and ride away, that extra moment could make all the difference.

The Himalayas still tips the scales in its favor with the abundance of torque available at low revs. New riders don’t need to worry too much about being in the right gear all the time, allowing the engine to handle the tricky situation. That’s not quite possible on the fancier liquid-cooled Yezdi because you have to dial in more revs or you’ll end up stalling the bike if you’re not in the right gear.

Yezdi seems to have taken the stalwart, industrial design language of the Himalayas and augmented it with iconic elements like the square tank and rectangular engine case of yesteryear. However, the Parsee bawa in me would have liked to see more of these items currently hidden behind pipes and metal guards.

While some of you may find the neat design of the tail with its small round lighting elements interesting, I didn’t find it very appealing. Frankly, I thought it was incomplete, really.

The Yezdi has a kind of solid, geeky dash to it. To be honest, that’s not a good use of the available square footage. There’s a large digital dial on the left (displaying your usual driving-related data) and a smaller dial for the turn-by-turn navigation system. We couldn’t test how it works because it was a customer’s bike, and Yezdi’s smartphone app is locked to a single phone number. So if your friend lends you their adventure, you technically won’t be able to use the help on your phone.

Himalaya has many dials, indicator signs and buttons. And to top it off, the placement of the new Tripper pod certainly feels like an afterthought. Reading speed and rpm isn’t much of an issue, but other data displayed on the small digital inset can be tricky to read on the fly. Fortunately, the Tripper works perfectly.

As far as build quality goes, the Himalayan is sturdy but isn’t smooth. Unfortunately, the construction and finish of the Yezdi is very sticky. The tank cage, which is a mandatory accessory that the company requires its buyers to purchase upon delivery for Rs 5,000, was misaligned, as was the grab handle. The scariest part was that the few bolts that helped secure the front disc to the wheel kept coming loose. The seat bracket was still missing, as was the front license plate bracket.

So, did Yezdi really make a better Himalayan? No Unfortunately. Because the promise made by Yezdi has not been fulfilled in the real world. Take the engine, for example. In isolation, he does a pretty decent job. However, for all its sophistication and advancements, it still cannot match the humble Himalayan air/oil cooled grinder when it comes to everyday maneuverability and ease of use in all riding scenarios.

More importantly, a good suspension setup is essential for an adventure rider. The Yezdi, again, feels well equipped but is no match for the Himalayas, which allow the rider to relax more often and for longer on various surfaces.

And it was here that Yezdi missed a golden opportunity. The Himalayan, as we know, is at the end of its life cycle, and it will be replaced by something meatier and more useful. But it seems that is still a long way off.

So if you are looking for adventure, the Yezdi might not be your best bet.