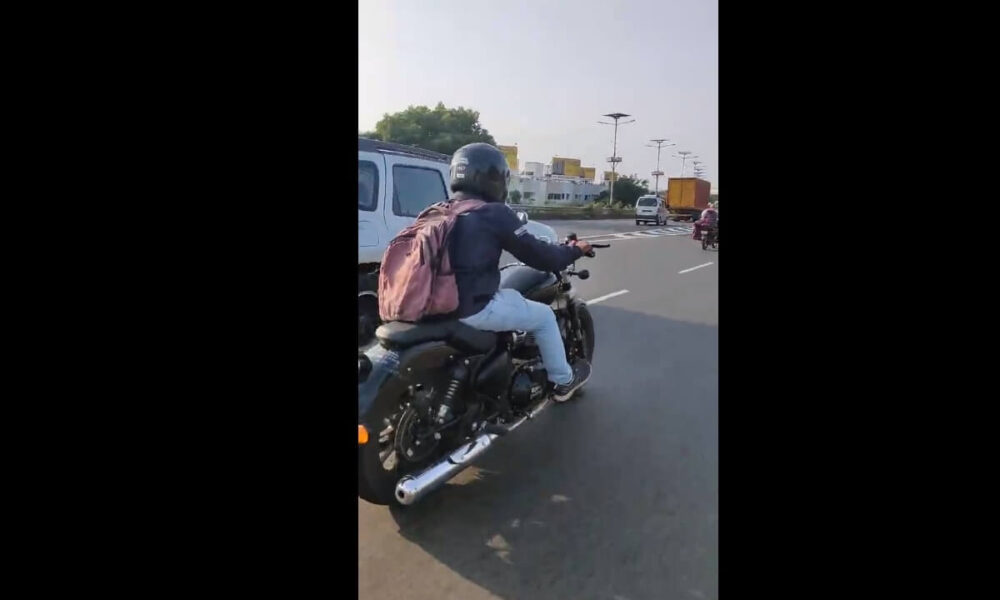 Building on the success of the Continental GT 650 and Interceptor 650, Royal Enfield is now ready to expand its range of 650cc motorcycles. A new series of spy images reveals that Royal Enfield is preparing a new cruiser motorcycle, which is expected to be based on the RE 650cc platform.

The new bike won’t use RE’s new single-cylinder platform, which will soon be introduced in the Meteor 350. The photo suggests the bike has similarities to the Royal Enfield 650twins. The test bike gets black housings instead of chrome housings for the 650cc engines. The motorcycle also receives an oil cooler mounted on the front of the frame.

It is reported that the new bike could be based on a different frame, as the metal tubes on the side are different from the 650cc Twins. In addition, the rear double shocks are also placed differently. The speckled model also includes a USD front fork, which will be the first for Royal Enfield.

The motorcycle has a low and long profile, while the front wheel is larger than the rear. The new Royal Enfield 650cc cruiser motorcycle features alloy wheels and a larger rear tire. The cruiser seems inspired by the Concept Royal Enfield KX, which was unveiled at EICMA 2018.

The speckled model has a larger teardrop-shaped fuel tank and a larger rear fender. There is a twin tailpipe, which looks like the one offered in the Interceptor 650. The bike has a large instrument console in the middle with a smaller one on the side.

The upcoming Royal Enfield cruiser is likely to receive a BSVI-compliant 648cc parallel twin engine with fuel injection technology. This is the same engine that powers the RE 650 Twins. It is capable of producing 46.8 hp at 7,150 rpm and maximum torque of 52 Nm at 5,250 rpm. To perform transmission tasks, the bicycle will have a 6-speed gearbox.