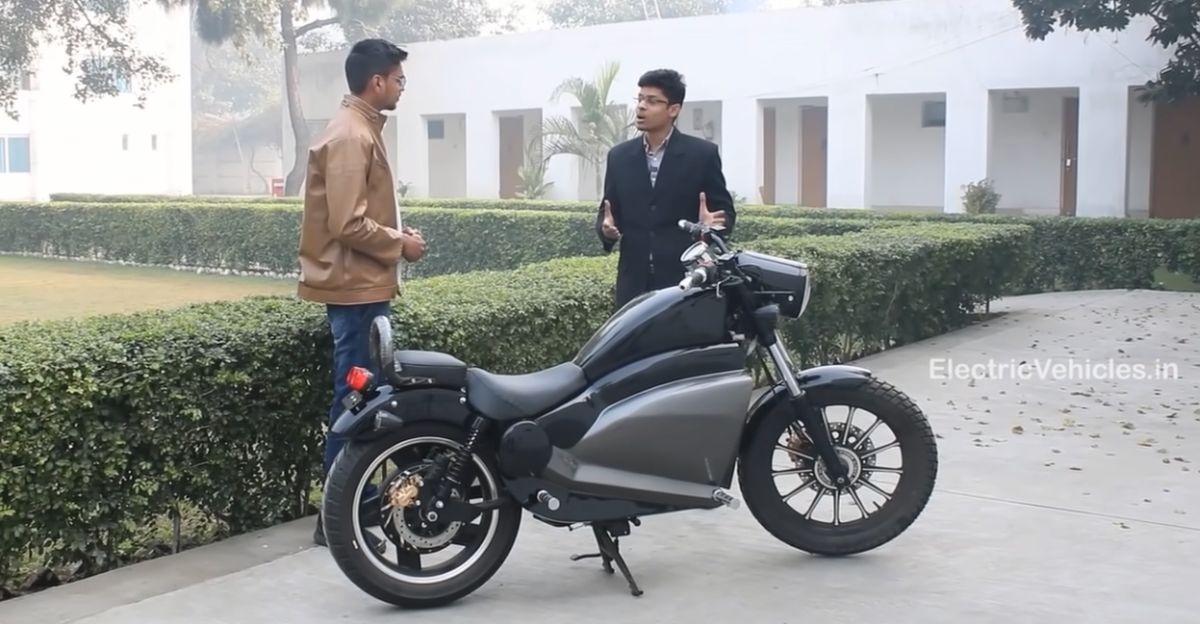 We all know that electric vehicles are gaining popularity around the world. In India, things are no different either. There are several existing mainstream vehicle manufacturers who have introduced and launched many electric vehicles. As for cars, we have Tata, MG and Hyundai. In the two-wheeler segment, we see more action. There are manufacturers like Ather, TVS, Okinawa and many new entrants like Hero, Ola in this segment. Several start-ups have also emerged in the country and are working on electric vehicles. One of these start-ups is Mazout Electrique and they have developed an electric cruiser motorcycle that aims to offer a range of 300 to 350 km.

The video was uploaded by Electric Vehicles to their YouTube channel. This electric cruiser was developed by a group of engineering students from the Technical University of Delhi. In this video, one of the team members explains the technique and fittings of the bike. The motorcycle seen in the video is actually their second prototype and they are currently working on the software part of the motorcycle.

In this video, vlogger mentions that none of the manufacturers currently have an electric cruiser motorcycle on the market and that is the reason why they started working on this project. The group named its start-up Mazout Electric and the name of the motorcycle is Mazout. They might change the name when it hits production.

The team is aiming this bike at riders who like to ride long distances. With such a long range battery, one can easily enjoy a ride without worrying about the range. The bike gets a hub-mounted motor on the rear wheels. This was done in order to generate more space in the bike for the battery.

The video indicates that the hardware part of the motorcycle is almost ready and that they are currently working on the software part. They are working on a system for the bike that would plan trips, charging would stop on its own whenever the rider provides details. The motorcycle supports AC and DC fast charging. The batteries can be fully charged in 6 hours from zero and to charge the batteries to 50% it takes about 3 hours. The bike has a top speed of 120 km/h which is quite good compared to many other products in the segment. In the video, the team member can be heard saying that since the bike will be getting a bespoke long-range battery, the price will be slightly higher. They expect the price to be somewhere between Rs 3 lakh and Rs 3.5 lakh.

Jumio: 2021 was the year of consolidation