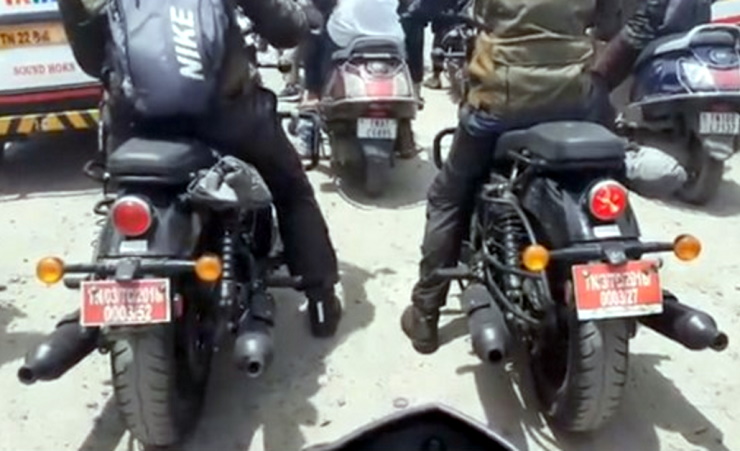 Ever since Royal Enfield launched the 650cc Interceptor and Continental GT650 twins in 2019, the bike maker has been making waves in the Indian market. The next major launch this year from Royal Enfield will be the Hunter 350, an entry-level offering. Soon to follow the Hunter will be the Super Meteor 650 cruiser, which borrows its key mechanicals such as the engine and gearbox from the 650cc twins. Two 650cc Royal Enfield cruisers have been spied recently, and at first glance the bike looks ready for launch. In terms of positioning, the Royal Enfield Super Meteor 650 cruiser is likely to be at the very top of the range, with a higher price tag than the Interceptor and Continental GT 650.

The reasons are inverted front forks, alloy rims, bigger tires, Tripper navigation console and a few other feature additions. The heart of the matter will be the smooth and reliable 647cc four-stroke parallel-twin engine with a 270-degree firing angle. The engine makes 47 Bhp-52 Nm on the Interceptor and Continental GT, and similar outputs are also expected on the Super Meteor 650.

The gearbox will be a 6-speed unit with slipper clutch. In terms of safety equipment, dual-channel ABS will be standard along with hydraulic disc brakes on both wheels. Dual front disc brakes could also be offered. A low seating position and revised riding ergonomics thanks to recessed footrests are other key changes on the new bike. The new bike will likely cost less than Rs. 4,000,000. Competition for Royal Enfield’s 650cc cruiser will come from Kawasaki Vulcan 650 and Benelli 502C cruisers.

Royal Enfield is consciously playing on the mid-segment motorcycle market and showing no rush to break out of the 300-800cc segment. Come to think of it, it all makes sense. Royal Enfield’s main market is India, and the roads here are best suited for 300-800cc motorcycles. Anything more than that for recreational motorbikes may be overkill for the kind of road infrastructure India has.

Moreover, operating in this segment also allows Royal Enfield to price its motorcycles quite affordably, making them accessible to a large number of buyers in India. Apart from selling bicycles in India, Royal Enfield also has a large export market spread across the length and breadth of the world. Even in export markets, Royal Enfield is known for its bargain-priced offerings, a proposition the motorcycle giant wouldn’t want to change in a hurry.

BMW Motorrad set to open its largest dealership in the Philippines