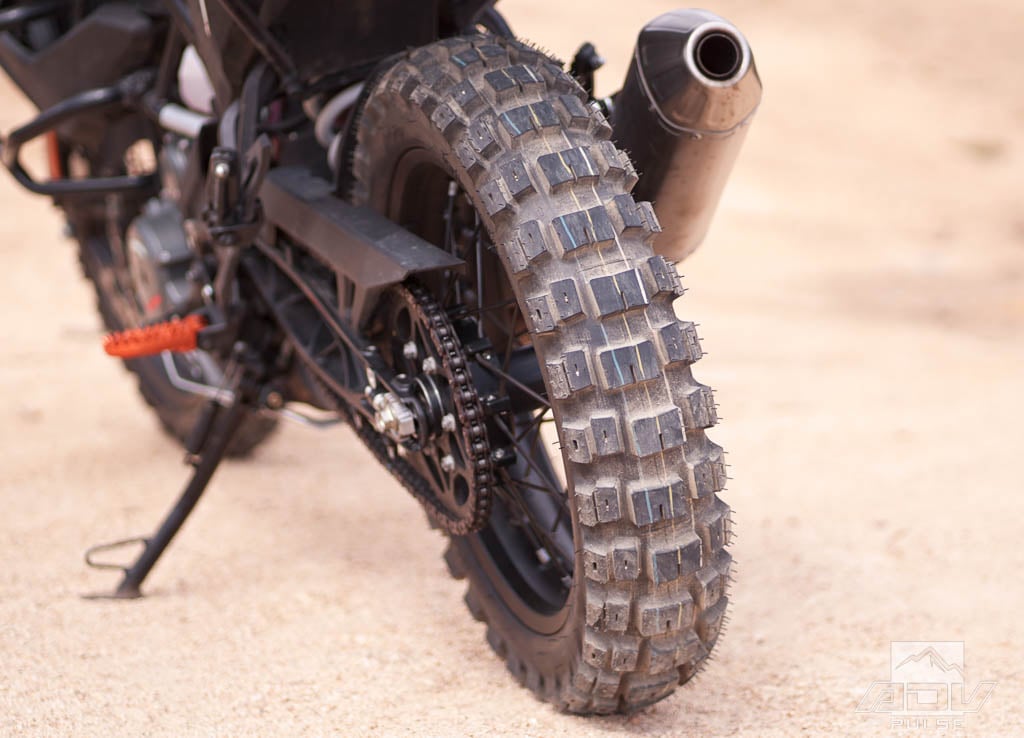 Choosing an adventure bike tire is tough because it’s like trying to decide on just one meal you’re going to have for dinner everyday for the next few months. Unless you have a spare set of wheels or are super excited about changing tires, mixing up your choice of rubber every day is not the norm. Where adventure bikes sometimes seem confused about whether they want to be dirt bikes or street bikes, adventure bike tires can sometimes have an even greater identity crisis. So, you need to find one that you get along well with.

Motoz is a relatively new entry into the club of motorcycle tire manufacturers. The Australian company was established in 2006 with a focus on off-road and adventure tyres. When the company’s Tractionator Adventure tire was released, it was one of the most aggressive adventure tires on the market. The Tractionator RallZ is an update that pushes an already aggressive tire further towards the off-road end of the spectrum, while maintaining reasonable road manners. They are marketed as 80/20 (dirt/street) tires and feature a hybrid compound with silica, designed to perform in a wide variety of conditions with better grip on muddy or wet roads.

The bike for this test was a KTM 390 Adventure, which arguably made the RallZ even gnarlier. The 110/80-19 up front and 130/80-17 in the rear looked unusually wide on the smaller bike compared to how a 90/90-21 looks on a big twin. Luckily, the tire seemed to behave off-road in the same way you’d expect from its looks – you can judge this book by its cover to some extent.

In the dirt: “Tractor” is the first word that comes to mind, looking at the big front. “Worry” is the word that comes to mind when looking at the pile of luggage strapped to those smaller wheels and the sand dunes in front of us. While a 19-inch wheel won’t track as well as a 21-inch wheel in sandy conditions, the RallZ’s wide footprint and lug-centric tread seemed to overcome that. Big dropouts in the rear do a terrific job of pushing the bike forward in a controlled manner, and again help overcome the performance characteristics of smaller off-road wheels.

While the off-road cornering mannerisms were good, they were also a bit unusual. The feel of the tire in a straight line to the edge is different. Not that there was a complete personality swap that made it a different tire when on the edge or in a straight line, but it felt less consistent compared to a less aggressive Continental TKC 80, let alone compared to the TKC 70 that comes on the 390 as the stock tire.

Using the TKC 80 to compare, in an off-road environment the RallZ has more overall grip, but the TKC 80 feels smoother and more predictable in the corners. You could drift a bit more with the Continental where the Motoz bites the trail and follows the terrain more precisely. Mind you, a lot of that trait probably has to do with the fact that these were smaller and wider hoops than I usually rode, and the fatter, flatter profile changes how the tire passes from edge to edge.

The tread pattern has good mud-shedding characteristics, so murky sections of trail were easily navigated. In hard-packed dirt and rocky conditions, the hybrid silica compound had excellent grip for casing stiffness.

In the street: Pavement was a concern based purely on appearance, and I got the first impression that long freeway miles would burn these things up in no time. Thankfully, as the final tread measurements would reveal, that didn’t happen. Another unexpected find, I assumed would be very noisy tires. Not the quietest treads, but certainly not the loudest. (I just rode what seems to be the loudest motorcycle tire, but that revelation will probably be saved for a future review).

When the tarmac is wet, the silica compound provided decent grip for the durability of this rubber. Besides jumping over tar snakes, sharp turns on the RallZ were more effective than expected due to the aggressive gnarly appearance. While not as sure on the pavement as a TKC 80 or TKC 70, the RallZ doesn’t come out of corners as much as the 80/20 dirt/street appearance suggests. Braking power and grip under acceleration were quite adequate.

Tire life: Multiple tests across California, Utah and Arizona covered a total of 2,766 miles on this set, with terrain ranging from rocks, hard-packed dirt, deep sand, twisty pavement and highway courses long distance. The overall asphalt/dirt riding percentage was about 60/40. The original new tire tread measurements were 9.3mm front and 14mm rear. After running nearly 2,800 miles, the tread depth had dropped to 7.9mm in the front and 4.9mm in the rear.

Assuming the tires are worn with 1mm tread depth and a constant wear rate, this would mean the front still has 74% of its tread and the rear 28%. However, tires typically burn off much of their tread during the first part of their life. Personal preference dictates when changing tires, but doing the math, this rear RallZ could possibly last another thousand miles. That puts it well within the longevity range of a TKC 80 ridden under similar conditions.

Who are they for?

Since the KTM 390 Adventure is a “lightweight all-terrain” adventure bike, in general, I would say the Tractionator RallZ wouldn’t be the first tire choice for the type of riding this bike would typically see. That said, due to the knobby nature and high mileage of the terrain in this test, it’s easily a candidate for my go-to tire, should I do more things on the small-bore adventure bike at the to come up. When the grade got very steep, the extra grip under braking and acceleration inspired confidence. When things got sandy, you knew the bike would have no problem crossing it, even if the rider might struggle.

At around $380 for the 19″/17″ pair used in this test, the RallZ is at the higher end of the adventure tire price bracket, but not that far north of the TKC 80 money. Riders looking to venture into confidence-inspiring rubber gnar, with enough road hassle to get you there and back in comfort, Motoz’s Tractionator RallZ is worth a look.

What could be improved

Jon Beck is fulfilling a dream of never knowing what to do when he grows up. ATV racing, competitive surfing and touring as a musician are in some ways part of what has led Jon to travel over 40 countries as an adventure motorcycle photographer, journalist and guide. From precision driving for cameras in Hollywood to filling a fountain pen for travelogues, Jon brings a rare mix of experience to the table. Although he seems happiest when lost in a desert somewhere, deadlines are met most of the time.

honda revives the dax ST125 for 2023 with improved power, frame, suspension and brakes