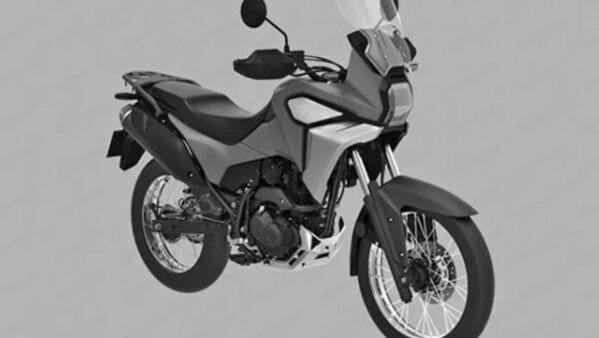 Honda filed a design patent for a dual-sport motorcycle based on the existing CB200X platform.

Honda filed a design patent for a dual-sport motorcycle based on the existing CB200X platform. Patent documents show that the bike is powered by the same air-cooled 184.4cc single-cylinder engine that already powers two of its bikes currently – CB200X and Hornet 2.0.

Coming to the brass studs, there are some familiar elements on the bike, including the use of the single downtube architecture for the frame and the box-section swingarm design that appear to have been borrowed directly from the CB200X. However, the newly patented design features the use of significantly higher ground clearance, as well as a high-mounted underseat exhaust outlet. Also, other highlights include the use of longer-travel suspension and wire-spoke wheels.

In a nutshell, all the details indicate that this is a much more serious adventure bike than the current CB200X, which is more or less a cosmetic work over the road-oriented Hornet 2.0 motorcycle.

In terms of features, the bike appears to come with a fully digital instrument panel which is most likely taken from the existing Hornet 2.0 and CB200X models. Similarly, it could also get things like all-around LED lighting and single-channel ABS, borrowed from donor models.

Powered by the same powertrain, expect the bike to deliver around 16-18hp and around 16Nm of torque. The transmission could include a 6-speed unit. The company could also modify the motor to match the character of the new bike.

Regarding its launch in the Indian market, it is still far from its official debut in the country. When launched, it could sell in a similar price range to the existing CB200X. So expect it to be more expensive than the Xpulse 200 4V which will be its most direct rival in India.