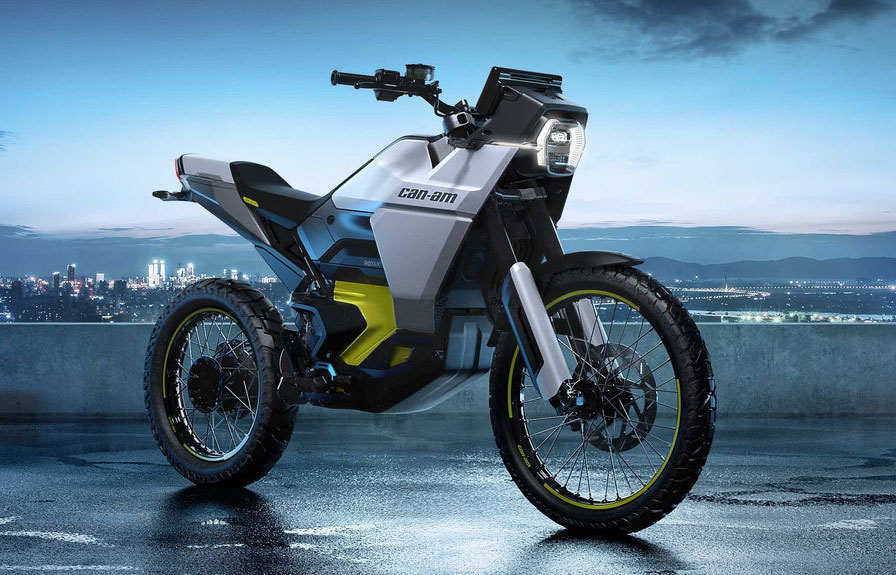 Nearly five months after announcing plans to return to the motorcycle segment with an all-electric lineup, Can-Am has dropped the lid on two of the models that will spearhead their two-wheeled portfolio. These will be the Canadian company’s first motorcycles after 35 years and one is inspired by Can-Am’s “Track n’ Trail” roots.

Full specs won’t be revealed until August 2023, but the company has launched a dedicated version to place for both machines in conjunction with the output of images and a video. Sitting on what appear to be dirt-friendly 21/18-inch wheels, the wire-spoke Origin is Can-Am’s dual-sport machine that appears to have its crosshairs aimed at bikes like the Zero’s FX. Inverted forks and a rear monoshock make up its suspension system while single disc brakes front and rear provide stopping power.

According to Can-Am parent company, Bombadier Recreational Products (BRP), the Origin is “designed to bring a new exhilaration to both the street and the trail for a more modern multi-terrain experience. Half a century ago Can-Am roared to victory on the track and trail, and today a new legacy begins. “One of the features BRP says riders will appreciate is its smooth, precise power even in tight, low-speed situations.

Cam-Am also unveiled a new street-focused e-bike dubbed the “Pulse” which the company says is intended to be “a balanced, nimble motorcycle designed to immerse riders in the energy of the city.” Smaller than its dual-sport counterpart, the cast-wheel Pulse is touted as a fun and compact commuter bike, complemented by its shorter suspension and lower seat height.

While each model has its own distinct design, ergonomics and capabilities to meet different needs, both are powered by all-new Rotax E-Power technology. Can-Am didn’t release actual numbers, but said the engine delivered “highway-worthy speeds with plenty of power and torque.” Both models are also said to feature cutting-edge technology and share features like a high-performance LED headlight, single-sided swingarm, large TFT display and Level 2 charging.

As for important details like power, range and weight, we’ll have to wait until next year to get full specs, Can-Am reps said. They did, however, mention that the bikes are expected to launch in mid-2024.