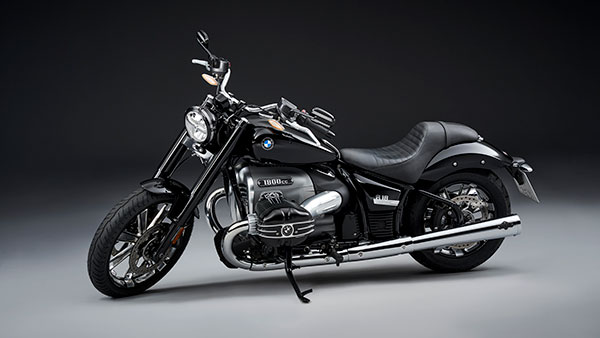 The new production version of the new BMW R 18 cruiser clearly borrows its design inspiration from the brand’s classic R5 model. The BMW R 18 cruiser features the same retro-modern design with the large drop-shaped fuel tank, however, has all modern technology; with the latest 1800cc boxer engine.

The new BMW R 18 Cruiser is offered in a range of two variants: Standard & First Edition. The special â€œFirst Editionâ€ variant will feature a multitude of exclusive touches, reminiscent of the classic R5. This includes the stripes, historic tank emblem, leather belt, slotted screws and gloves; all this gives it the “old school” charm.

The BMW R 18 Cruiser comes with a wheelbase of 1,731mm making it a big bike. In comparison, BMW’s new cruiser is longer than the Honda Gold Wing. The R 18 weighs 345 kg, 23 kg more than its rival, the Harley-Davidson Fat Boy.

Apart from the retro visuals of the BMW R 18, everything else is modern. This includes the long list of electronics available on the bike. Some of the more prominent features on offer include three drive modes, automatic stability control, engine slip regulation, traction control and ABS.

The BMW R 18 also comes with LED lighting all around, including headlights, taillights, daytime running lights and turn signals. The motorcycle has a large analog instrument panel with a small digital display.

To finally get to the heart of the matter, the BMW R 18 is powered by a 1802 cc boxer engine. It produces 91 hp at 4,750 rpm and 149 Nm of torque between 2,000 and 4,000 rpm. The engine is mated to a six-speed transmission, with reverse gear driven by an optional electric motor. In addition, inspired by the classic R5, the new BMW R 18 cruiser also comes with an exposed shaft drive.

The BMW R 18 is a full-fledged heavy-duty cruiser offering from the German brand. BMW Motorrad currently has no plans to introduce the motorcycle to the Indian market. However, if it comes to India, the motorcycle will be introduced as a CBU and in limited numbers.