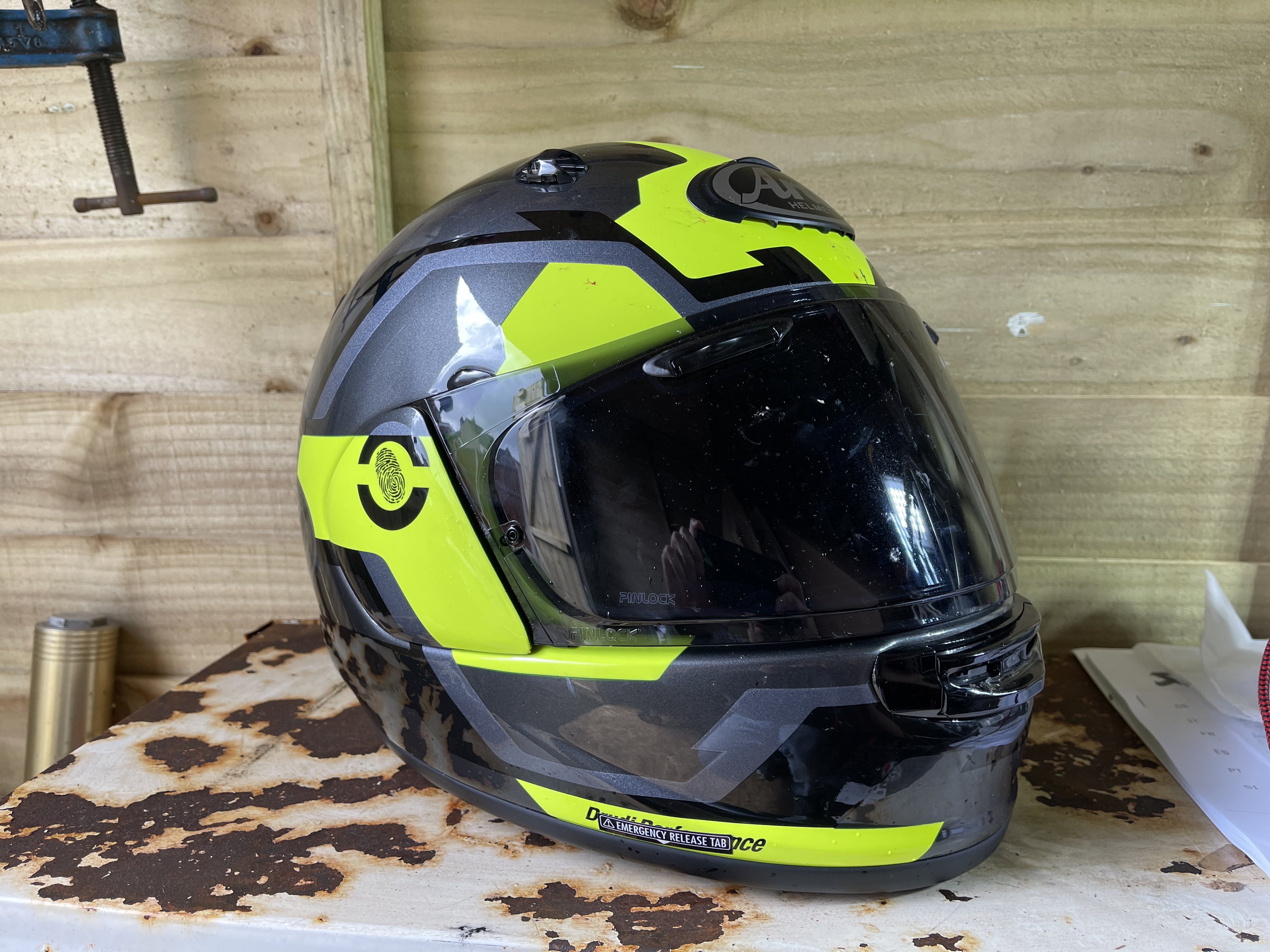 JOINING the range above the Chaser-X and below the track-oriented RX-7V, the new Arai Quantic is intended for sport bikers and it is the first motorcycle helmet approved according to the latest ECE 22.06 standards.

The Arai Quantic is available in sizes XS to XL, with a range of six graphics and four solid colors. Graphic models are Â£ 599.99 while solid versions are Â£ 499.99.

As with all Arai lids I’ve tested, the interior of the Quantic is a luxurious and comfortable place to rest. The liner is Arai’s comfort liner, which means the material is softer and more plush than that of the sportier lids in the range. The Quantic also has a wider opening than some previous models. This was done to make life with the cover a bit easier, and it’s a nice feature on a cover that will spend a lifetime being put on and taken off frequently during a ride.

I’ve always been a medium in Arai’s size and I feel totally confident ordering one of their lids without trying it knowing it will fit like a glove. As you would expect, the fit and comfort of the cover when it arrived was just perfect. It sits comfortably on my head, with no tight spots on my forehead or neck. If you are a rider who has always used Arai products, you should have no problem simply ordering the new cover in the size you gave. It goes without saying that if this is your first Arai product, you need to upgrade to your local dealer for mounting. The double D-ring closure includes a soft flap to prevent it from rubbing your neck while riding.

Arai never claimed to make the lightest helmets on the market and weighing 1640g on my digital scale, the Quantic is by no means a featherweight. That’s not to say it feels heavy while driving, and instead, the Quantic feels solidly built, with reassuring, solid quality for the entire cover.

The outer shell of the helmet features a large chin vent, two front vents, the large center mounted logo vent, and two small teardrop vents a little further back on the shell. The rear of the cover features an exhaust vent around the neck, two vents on either side of the cover, and a large closable exhaust located in the rear spoiler.

First, the chin vent. It looks a lot like the chin vent on my old Chaser-X, although on closer inspection it has been extensively redesigned for the new Quantic. It works the same way, although it now appears to be producing about double the airflow that the Chaser-X’s vent did. Some of the airflow from the two-position vent is directed to the visor and the rest is sent directly to your mouth.

Raising the lid slightly and the next vents are the small (but mighty) eyebrow vents. They look tidy and can be difficult to open, but their location right in the middle of the high-pressure airflow can be a boon on a hot day.

The 3D logo vent on the front of the cover looks like a gimmick, and with tiny entry holes, I doubted its effectiveness. On the road, I was surprised to find out how useful it is to direct a large amount of cooling air into the inside of the cover. Its location on the helmet is key, with the logo sitting directly where the airflow at the highest pressure hits the cover.

A new addition to the Quantic are the two small teardrop-shaped vents that flank the 3D logo. Like the rest of the vents on the lid, they look small but work well. They open and close by sliding the entire ventilation structure forward and backward, making them very easy to use even with thick winter gloves.

One of the most efficient vents on the cover is the exhaust which is mounted under the rear spoiler. Its location is such that it is in an area of â€‹â€‹extremely low pressure, which means that when opened, it essentially sucks hot air from inside the helmet. The vent is operated by moving a slider located in the spoiler on either side. It’s fairly easy to find and use on the go, and can be fully open, semi-open, or fully closed. Each setting is confirmed with an audible click, which means you’ll always know what airflow you’re getting.

I tested the Quantic in heavy rain, and the visor seal and vents kept the inside of the lid dry and comfortable.

The Arai Quantic comes equipped with a Max Vision Variable Axis (VAS) visor and a Pinlock will arrive in the box ready to install. The VAS system raised eyebrows when it was first introduced, as it seemed to add an extra layer of complication to visor changes. Having only really used this type of visor system, I really don’t find it a problem. Likewise, some find that the locking mechanism of Arai’s VAS helmets is not good. While it is true that you have to use your left hand to lift the visor when traveling, I have become accustomed to the system and appreciate the added security of keeping the visor firmly closed.

To check out the noise of the Quantic, I headed over to the 2021 Harley-Davidson Lowrider S for a 20 mile B-road loop through the countryside. I chose the Lowrider S because it has a small windshield mounted on the headlights that directs a gust of turbulence towards your face at around 75 mph. After doing the loop in the Arai Quantic, I returned home and traded for another brand of helmet to see how different it was.

The Arai handily won the back-to-back event. Its super-sleek outer shell and cleverly designed vents make the Quantic feel like it’s slicing through the air, instead of pushing its way through it. At first I was worried that the two teardrop shaped vents on the top of the cover would whistle at high speed, but I was pleasantly surprised to find the helmet completely whistle-free! Although the new Arai Quantic is quiet, it is still essential to use earplugs while driving, especially if you are going to be spending long periods on highways and expressways.

One of the most notable features of the Quantic is the rear wing. Not only does this help create an area of â€‹â€‹low pressure to help release hot air from the helmet, but it is also said to aid stability at high speeds. To verify this theory, I took my old Chaser-X for a ride on the Harley on the same route, then traded for the Quantic. The Chaser-X has a similar shape, but with the exception of the large rear spoiler. Instead, the Chaser-X features a much smaller, less protruding case that covers the rear vents.

I never really thought of the Chaser-X as a helmet particularly affected by turbulence, but comparing it back to back with the new Quantic produced a surprising result. At highway speeds, the new cover is significantly more stable and has less tendency to break to one side during highway shoulder checks. It’s this kind of fatigue-reducing ability that will make this helmet a must-have for anyone looking to cover great distances at high speed.

While the full Arai lineup admittedly consists of many lids that look a lot like the untrained eye, there’s a lot more to work here than just exterior styling. The new Quantic is proof of this. On the surface it looks like an RX-7V or Chaser-X simply with revised vents, although once you try it the changes introduced with this helmet become blinding.

The Arai Quantic is an extremely well-built, comfortable and very quiet motorcycle helmet. It is ideal for those looking for a long range solution for sporty driving, and thanks to extensive and efficient vents, it is an excellent choice for riding all year round.

For more information on the Quantic range, visit: www.whyarai.co.uk