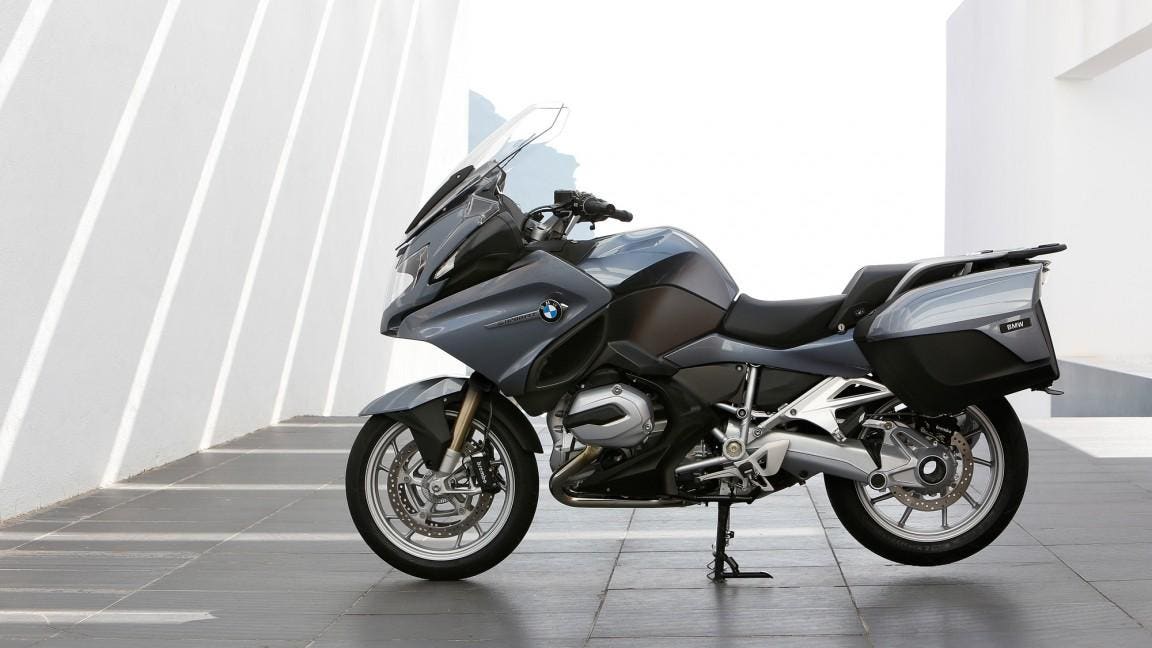 My friend Bob drives BMWs. In the constantly evolving puzzle of his garage, there is always at least one BMW. For a little while last year Bob and I went back and forth to trade in my old one.
Sportster for his old BMW R 1150 RT. We never got it to work, and Bob sent his BMW out on the road when he found a good used GS. But it got me seriously thinking about BMW motorcycles.

The BMW R 1200 RT underwent a complete makeover for 2014. The new model got off to a bumpy start when a suspension component caused a â€œDO NOT DRIVEâ€ warning to all owners and the recall / repair program that followed . After the high-profile recalls in the automotive world over the past few years, this one was somewhat embarrassing for BMW, but the company did a quick job on the recall and the RT was well on its way to winning multiple awards. â€œBest Sports Touring Bikeâ€ from passionate magazines. It returns roughly unchanged for the 2015 model year.

The RT is a sophisticated machine with a combination of mechanical, electronic and design features that all work together to deliver a delightfully comfortable, agile and engaging ride.

RT looks like an athlete, dressed in a full fairing and body like a bespoke suit. Hard saddlebags are standard, and a nifty and roomy top case is a smart option ($ 1,240 base / $ 1,506 fully equipped). The bags all operate with the ignition key and can be locked remotely with the remote or the lock button on the dashboard with the optional central locking system ($ 400). The bags all remove from the bike with a new turn of the key and have sturdy handles and rubber feet. I wouldn’t even bother to use bag liners ($ 306) for most trips – I would just unlock the bags at the destination and carry them to my hotel room.

I was very impressed with the RT’s narrow waist – it’s incredibly narrow, allowing you to comfortably put your feet on the ground from the 32.5-inch seat. If that’s not low enough, you can adjust the seat height to 31.7 ” without using any tools. The 17-inch cast aluminum wheels keep things level front and rear. The 6.6 gallon gas tank should be good for over 250 miles of range on the 604 lb (dry weight) motorcycle.

An electrically adjustable windshield responds to commands from a button on the left handlebars. It intelligently retracts when stopping and returns to its previous position when the bike is turned back on. At 6’2 “with a long torso, I found the best wind protection with the windshield fully extended. I was still able to look over the screen (my preference), but the noise and the vibrations were greatly reduced.

Following a long BMW tradition, the front suspension is a Telelever. The Telelever replaces conventional telescopic forks with a system that uses both forks that attach to a steering head and a trailing link that attaches to the frame. BMW claims that the Telelever arrangement results in reduced dive during braking and better feedback. The rear suspension is managed by a continuously variable and hydraulically adjustable Paralever monolateral swingarm. It is difficult to assess the Telelever / Paralever configuration in isolation, as it works with the new Dynamic ESA (Electronic Suspension Adjustment) system. The dynamic parameters of the ESA are accessible via the controls on the left handlebars and the menus nested in the dashboard. Three drive mode settings are available: Rain, Road and Dynamic – fairly self-explanatory, and they affect the suspension, ABS (anti-lock braking system), ASC (automatic stability control) and engine control in same time. In addition, the shock absorber settings can be fine-tuned to â€œSoftâ€, â€œNormalâ€ or â€œHardâ€ and the load settings can be adjusted to match a pilot, pilot plus baggage or pilot plus passenger, all without tools, just using buttons and menus. I found that I played with these menus at first, but as soon as I discovered the sweet spot (for me it was “Road”, “Normal” and solo rider), I left the settings alone and I Enjoyed a balanced, well-cushioned and smooth ride with excellent road feel.

The engine is at the heart of every motorcycle. The RT receives a new 1,170cc twin-cylinder boxer engine that uses carefully targeted liquid cooling and air cooling. Liquid cooling was necessary to comply with emissions and noise regulations, and it is seamlessly integrated into the bike. The claimed peak power is 125 and arrives at 7,750 rpm; The claimed maximum torque is 92 lb-ft at 6500 rpm. The engine is the same as that of the very popular BMW R 1200 GS dual sport, but with different gears in its six-speed transmission. I loved this engine and this transmission. The acceleration is always there and the wide torque curve means that the gearshift can be adjusted to your driving style that day. On a long highway drive, I accelerated smoothly to cruising speed, shifting into sixth gear as soon as possible. In heavy traffic, I held gears a little longer, keeping the revs high and the bike ready for quick action. While cruising through the canyons, I let the mids do the work, staying away from the higher RPMs. The engine was happy no matter what I did, and so was I.

Electronics are both the strength and the weakness of RT. The left handlebars are a very crowded place, and for me that meant trouble. Too much is happening there. Two buttons for cruise control, a trigger for the lights, menu button, windshield adjustment, turn signal control and horn button all press on the bar, and there is a control dial between the handle and the button housing. With cold weather gloves on, I had difficulty using the individual controls and constantly dialed the control dial inadvertently, increasing the volume of the audio system. The fact that most of the audio controls are on a panel on the left side of the fairing and it’s difficult to select the right button without looking down further complicates the operation. The more I rode, the more I became familiar with the set-up and operation, but I still found it distracting and more complex than necessary.

On the plus side, heated grips and a heated seat are standard and work great. The passenger benefits from a separate heating element and control, accessible to the passenger.

Navigation is an option ($ 799) on the RT, handled by a plug-in unit designed for BMW by
. The GPS unit lives under the lip of the fairing, but will not lock for safety – you must remember to remove it when you park, or anyone can rip it off and walk away without using tools. It would be an expensive lunch break.

I realize that I’m so taken with the details of the RT – and there are a lot of them – that I haven’t really talked about the experience of driving the RT.

I loved riding this bike. I wasn’t sure I would, as I was concerned that the driving position was not viable for me. My concerns were unfounded. I could cycle across the country tomorrow, and I would if I had the chance. The flexion of my knees and the position of the footrests allowed me to move around in my seat, prepare for the turns, and move forward and backward as conditions changed. The handlebars rose to meet me in exactly the right place for a straight, slightly forward posture that was easy to maintain and put no strain on my wrists.

I have ridden the RT everywhere, from city streets to country roads, and from crowded highways at rush hour to open highways. The bike is manoeuvrable and easy to handle at low speeds, and fast and stable at highway speeds. My longest commute was a 200 mile jaunt from my home in North Hollywood to visiting my family in Los Osos on the central California coast, one of my frequent test routes. The RT excelled in all conditions. Biking is a frequent choice for the California Highway Patrol, which gave me the side benefit that alert drivers give in to traffic when they see me in their mirrors, thinking I can be CHP. To protect and deflect, I say.

But the BMW R 1200 RT is a very, very impressive motorcycle, and one of those bikes with enough strengths to make buyers ignore its little weaknesses and quirks. I now understand my friend Bob and his garage a little better – and I envy his collection of BMW motorcycles a little more.